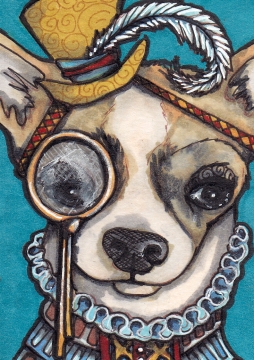 A fine person called Sarah (The WonderStrumpet!) posted a pic of her dog Tigi in a discussion about fancy clothes, so it seemed clear she was hoping he would end up in some. And so he  has. (Though his nose is too big in my version, arrrgh.)

Side-by-Side Chihuahuas
Two photos by Sarah, with Lord Stinkeye between
(Also, I cropped the photos.) :)

Not too bad! He doesn’t look like a Stinkeye, but perhaps he was more ornery in a misspent youth. (And to be fair, she didn’t say he WAS a stink eye. Only that he gave her one. And who hasn’t given a stink eye or two?)

Hello to Paint Party Friday! And one more thing. I made a Flickr set of fancy clothes (human and beast) Woo!