I thought it was time to start a page with my favorite swap sets and themes! This page is for my favorite 4-5 images from each theme. (By date, with the most recent first.)

What we have here is a love triangle. Two sisters and the object of their affection, the Duke of Dandelion. (Also, Lady Hisst is sure she was adopted.) 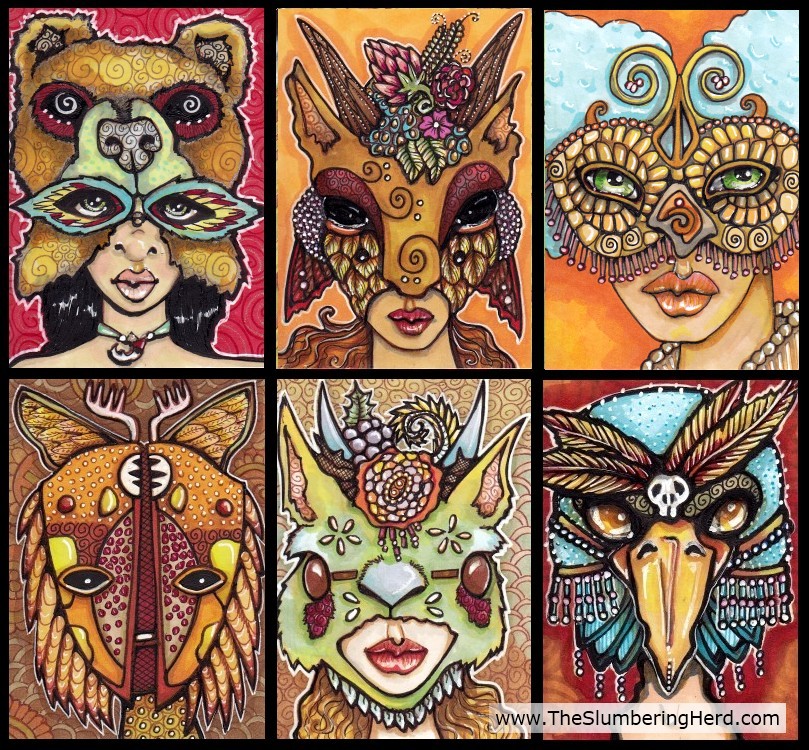 Spirit masks is a really great theme! A great opportunity for some wild animals and crazy accessories. (My mouths have been improving at this point, too. Thank goodness.)

Fairies and Folklore is always fun! I really love the little bird on Ella’s hat.

My most recent hosted swap at illustratedatcs.com, which should have been called “Fancy Dress” from the start (but I guess I wanted to be much more specific). A perfect kind of theme for tiny details.

Trees Swap – some whimsical treehouses for an early 2014 swap.

Over at illustratedatcs.com, they do a week long Halloween art-a-thon every October. These are some of my favorite Halloween  themed ATCs. (A few more appear below in the Tiny Houses set. )

The tiny houses were inspired by some of my cityscapes (below). These are just a few of many! You can see all my tiny houses at the 100 Tiny Houses project.

One of my favorite subjects! I really wanted to do a swap after I started doing some of these cards, but someone else beat me to it. Arrgh! To see all my tiny cityscapes to date, I have collected them in this Flickr set, The 100 Cityscapes Project. (I want to do a poster out of this and other sets, but it’s just an idea with no concrete plans so far.)

Mostly done for a Birds swap, the last guy was made a bit later.

Some of my favorite cards were produced for People of Planet X. The final two pictured still live at my house! I won’t do all their stories again (you can find some of them here), but here is the Space Riddle: “Is it a blind cat alien wearing the eyes of a lizard? Or is it a lizard alien surgeon wearing the facemask of a blind cat?”

Less cute than most of my subjects, the Bones swap turned into a pretty cool exploration of giant eyes and fancy backgrounds, which continued into the next swap, People of Planet X! (Both swaps were run by AnnD, and they were so great!). Lots of progress pics here.

A favorite tale, for the Tikki Skull image, above:

This carved and painted image was discovered hermetically sealed in the hull of a 19th Century steamer wreck. It is in fact just a small fragment of a six foot by eight foot fresco that featured hundreds more skulls of varying sizes, no two with features exactly the same. A sixty pound volume found beside the huge piece identified this image as the “Tikki Skull” and alluded to magical powers it could bestow upon a human, provided the asker was willing to allow an alien creature into his body for a short period of time.

Scientists of the time could not identify the wood from which it was made, and the whole of the artifact disappeared in the 20th century.

People of the Forest was the second swap I hosted and one of my favorites of all time. It also inspired many other “People of” swaps, run by others, like People of Planet X, above. The story of the Last Lizard King, as well as a photo of all the cards submitted for this swap can be found in this post. 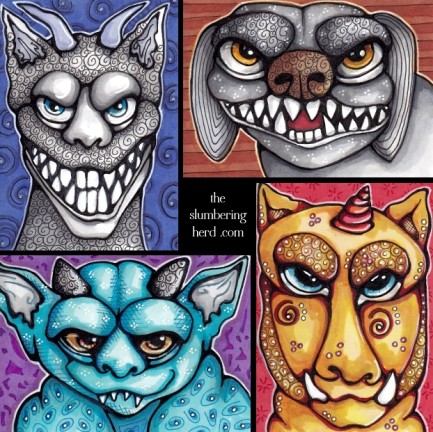 Gargoyles! Cute plus creepy can be a fun mix.

Thanks for visiting! Do you have your own swap set page? Link it in the comments!

9 thoughts on “Portfolio of Swap Sets”