There was once a mute witch who lived in a cave outside of town with her cat called Arturos. She sold love potions and healing balms to any villagers brave enough to visit. As legend tells, she plucked out her own right eye, and the right eye of Arturos, and switched them. It is said her new eye allowed her to see into the twilight world of cats. What Arturos saw, he never told.

Submitted to “Worn” for Illustration Friday. Both the eye and the skull are quite worn! They were displayed for a short time at the Oddity Museum of Ulster, but were reportedly removed when an elderly couple insisted the eye was moving in its (borrowed) socket. At least that’s what the placard beside the plaster replica says! I do not know if any of this story is true, but it does bring a touch of magic and a few curiosity seekers to the village. 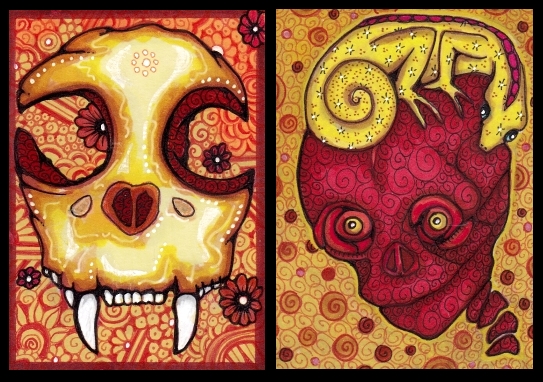 Two more skulls! I quite like the red one with the lizard. This is not subject matter I usually cover! All three were created for a “Bones” swap. I’ve been thinking lately I want more cards for my shop, and fewer for trading – simply because there is only so much time in the day! On the other hand, the swaps provide lots of inspiration in the form of other artists (just like Illustration Friday!) and also require subjects I am not as familiar with, which is excellent practice. Balance is the thing I must find.

Reference photo for the red skull (it’s a bit spooky). Thanks for stopping in!

15 thoughts on “Patterned Skulls in Ink for Illustration Friday”