When she saw that Horace was feeling melancholy, Gina called in the troops to cheer him up. Just moments after this image was captured, Horace cheered up immeasurably, grabbed his bright green mandolin, and led them in a rousing rendition of “I Want to Be Your Friend” by 11 Acorn Lane.  Gina beakily provided horn accompaniment, while Oditi (far left) insisted on repeating the  Deedlee-doo, Deedlee-dee bit. They jumped and clapped and spun around.

Happy January 1! The year ahead is filled with promise, opportunity and undreamt surprises. New discoveries, rediscoveries and unwelcome news. Birthdays, lazy Saturdays, and days when the sun will seemingly fail to shine.

But you are here! Thank you for coming. I hope this year holds lots of the good things and less of the bad things, for everyone. More recent sketching below. 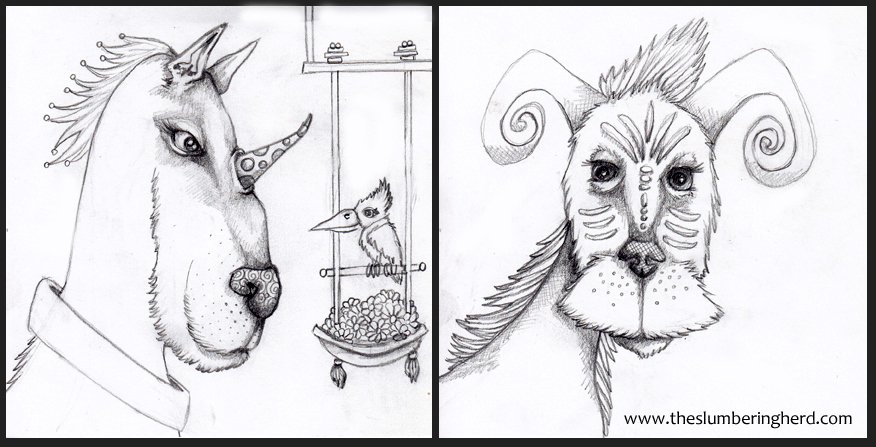 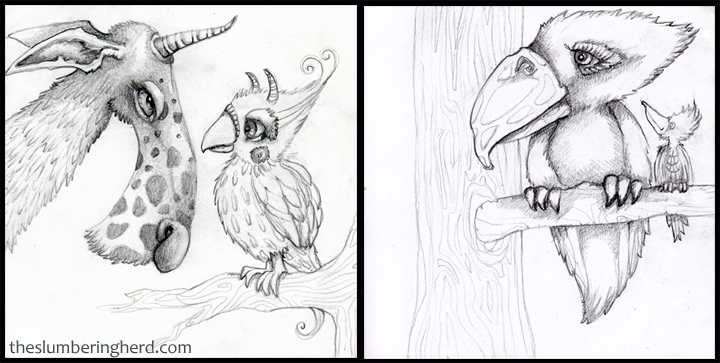 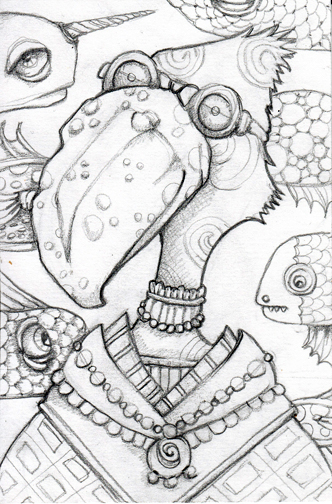 And then there were fish, and things became muddled.
pencil sketch, 5″ x 7″ 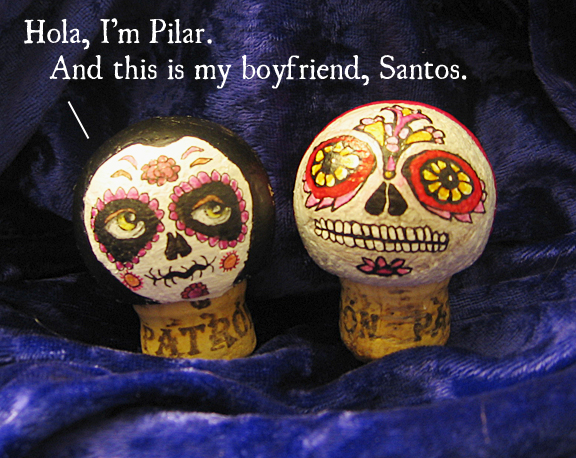 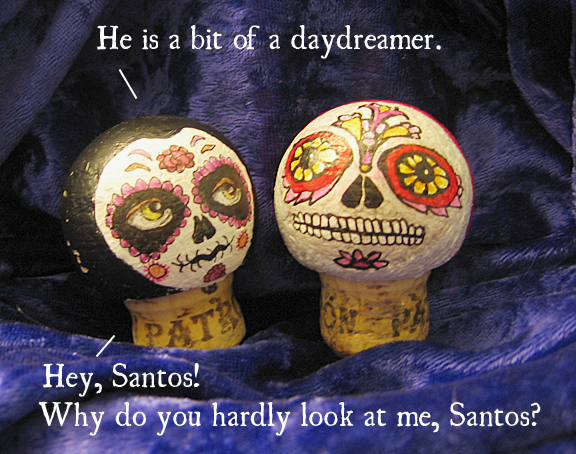 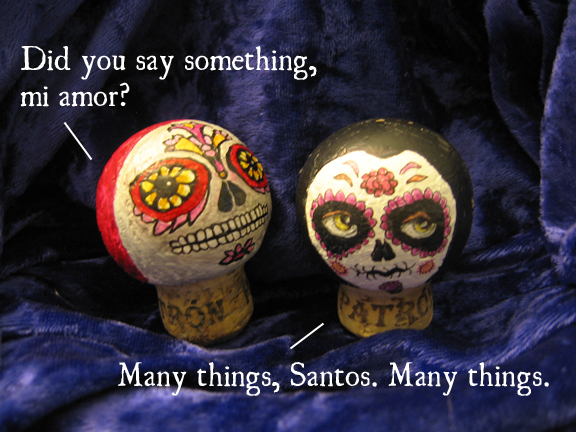 As mentioned in the previous post, I was challenged to do some Day of the Dead imagery on Patrón corks. These are the result (more than a year later)!

These may get hair/hats/accessories, but I felt the need to post them as is! I need to seal them with something. AnnD of Wonderstrange has suggested Krylon, so I may get some of that.

This was actually the first of the secret santa bunch, which includes the sleeping tiger and sleeping dragon previously posted. The Legend of the Sleeping Kitten turned into a sort of universal foundation tale with slightly different details in different parts of the world. Hence: a kitten, a tiger, a dragon. It is my intention to write a book in 2015. Perhaps their stories will be in it!

Thanks for dropping in! I’ve had some blog issues recently so am slow to post. The holidays are always a strange time, aren’t they?

Also, you MUST WATCH THIS cute and hilarious (and short!) thing. I would not steer you wrong. 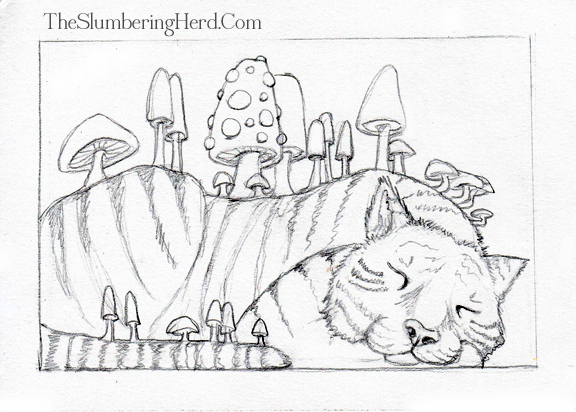 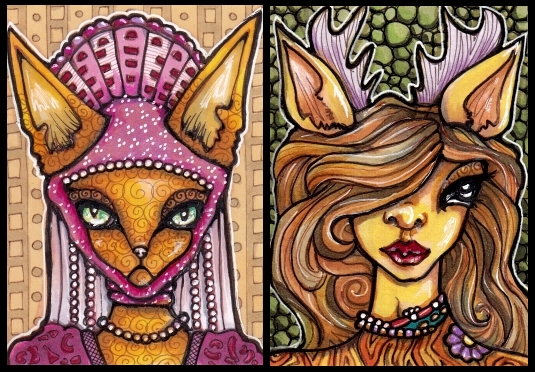 Half-sister to Ladies Mrowr and Hisst, Lady Rawr is CEO of a thriving production collective specializing in small decorative spheres made from aluminum foil. They call the outfit Shiny Things on Strings.

I have also produced this exceedingly wonky house, a questionable foray into perspective. Color coming in the next post. Thanks for stopping in! 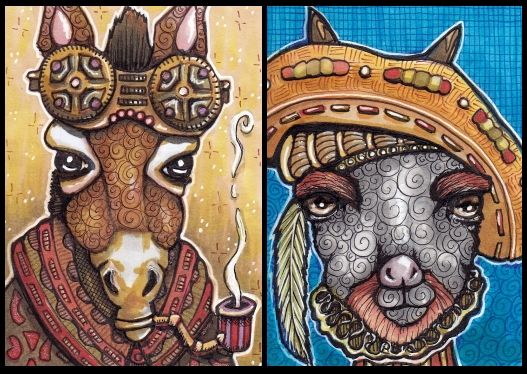 A couple of old world European fancy animals: a Spanish donkey and French goat. El Burro is often recognized, as he is the grandson of the donkey from The Bremen Town Musicians. He and Maynard tried to start a little banjo duo at one time, but they determined very quickly that their friendship would not survive the great chasm of their artistic differences. They are still friends. Both continue to play, but not together.

I am making progress with my plan to make a Fancy Animals poster! Here are 20 (which includes four created before the recent fancy animal frenzy.) 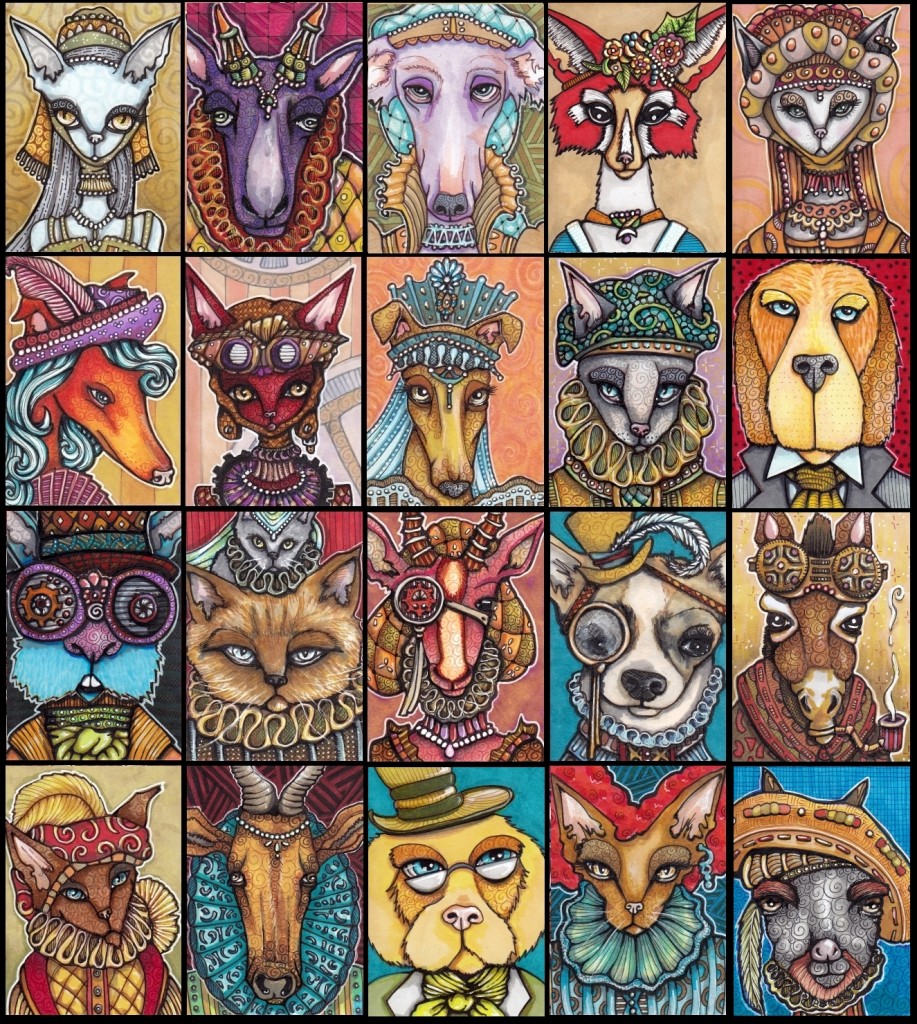 I think the poster should include nameplates. So I have to figure out the best way to do that. (A variety of handdrawn nameplate ribbons? Something digitally created?) Please feel free to make suggestions of this nature!

Happy Paint Party Friday (which was yesterday)! Thanks for stopping in! Submitted to “Red” at Illustration Friday.

Mrs. Thurston’s fourth-grade class was reading about Hobbits. It was nothing by Tolkien of course, whose salacious and perverse vision was not appropriate for grown people, let alone children. Such was the lack of wisdom embodied in Mrs. Thurston, whose hippie parents would have been appalled by what their daughter Sunflower had become.

Unfortunately for Mrs. Thurston (or fortunately, if you believe the loss of ignorance is always a positive, even if painfully gained), she had a student named Maybelle Llewellyn whose mother had finally reached a breaking point in hearing about this narrow-minded teacher every day her child returned home from school.

On this particular day, Mrs. Thurston had assigned several pages to be read aloud by the students as she daydreamed about Father Knows Best, her favorite tv show. Unbeknownst to Mrs. Thurston, Mrs. Llewellyn had swapped the second half of all the childish folklore texts with an adventurous tale of two demon sea witch sisters, Djalla and Djegga, who built a cyborg mermaid to take over their ocean planet.

The sentence that snapped Mrs. Thurston out of her Jim Anderson fog began, “Djegga decided to use the lower orifice as a weapon repository,” and only because little Jenny Hernandez – despite being the best reader in the room – stumbled over both “orifice” and “repository”.

What happened next the whole town has promised never to reveal. Such was the agreement with Mrs. Thurston, who agreed to leave quietly with her small pension.

In the end Mrs. Llewellyn was given 25 hours of community service (and the enduring thanks of many local parents) and Mrs. Thurston retired to rural Wales with her blind husband. Maybelle Llewellyn eventually became a successful fantasy author, specializing in creatures of the ocean.

Many thanks to AnnD, who requested a story to go with my Demon Mermaid (now one of the Demon Witch Sisters). Thanks to everyone for stopping in!

Technically the last of my 29 Faces posts (but also including 30-32!), these art cards were made for a “My Weird Family” swap at illustratedatcs.com. 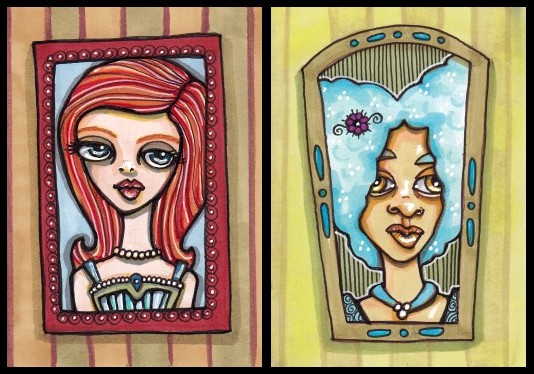 Strangers never believe cute cousin Cheryl when she tells them she makes artificial eyeballs for a living (mostly for medical use but sometimes for special effects in movies). The rest of us are well-aware of her lifelong fascination with eyeballs. One year when she was in high school we all got fish eyeballs for Valentine’s Day, sculpted out of Fimo.

Billie Blue is a mortuary makeup artist. She tried doing makeup for tv but she didn’t like to talk to people very much, so this was the perfect solution. However, after working in the mortuary for several years she stopped talking completely. One family rumor is that she speaks telepathically with her dead clients. 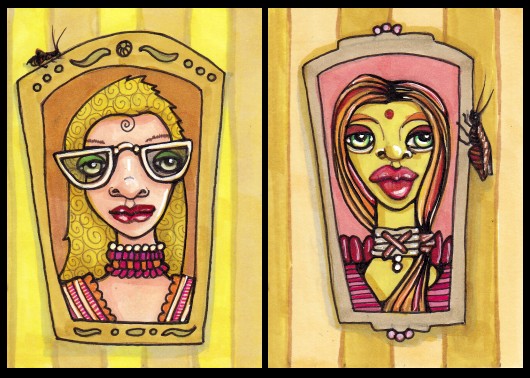 Most people did not  believe Kimmie and Carla were twins. At least not with the same father. Many comments were made regarding the postman, the milkman, and the local mechanic. All those theories charitably(?) assumed the husband was responsible for half of the set.

The truth, as their mother confessed later in a haze of Patrón, is that the UPS man was Kimmie’s father (indicated by the nose, the glasses, and the deadpan wit), and their much older child’s biology tutor was Carla’s father ( as evidenced by the lips, the skin tone, and her fascination with insects).

Not too many process pics – but a few! Thanks for dropping in!