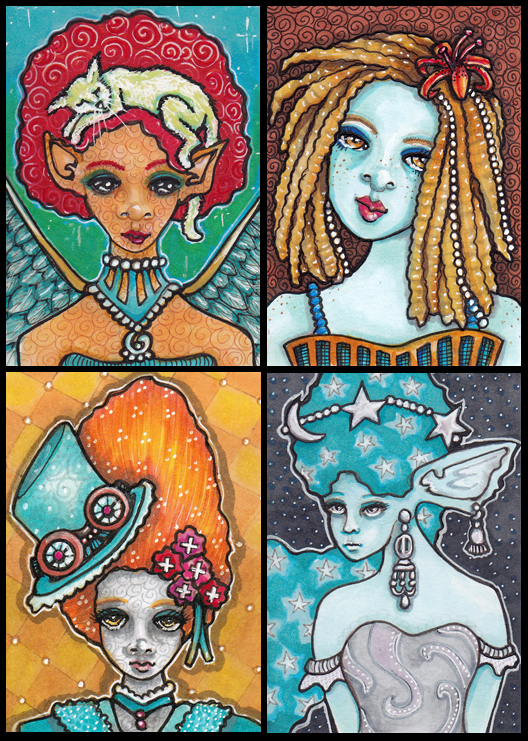 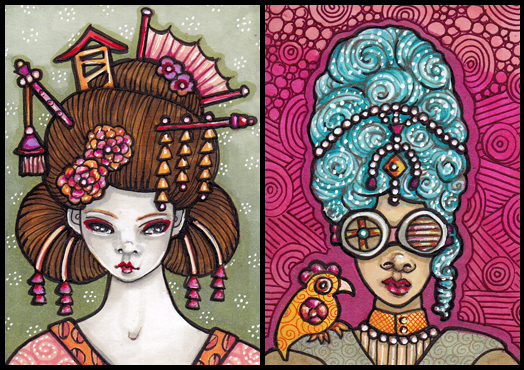 The latest fancy lasses, who have inspired this collective: 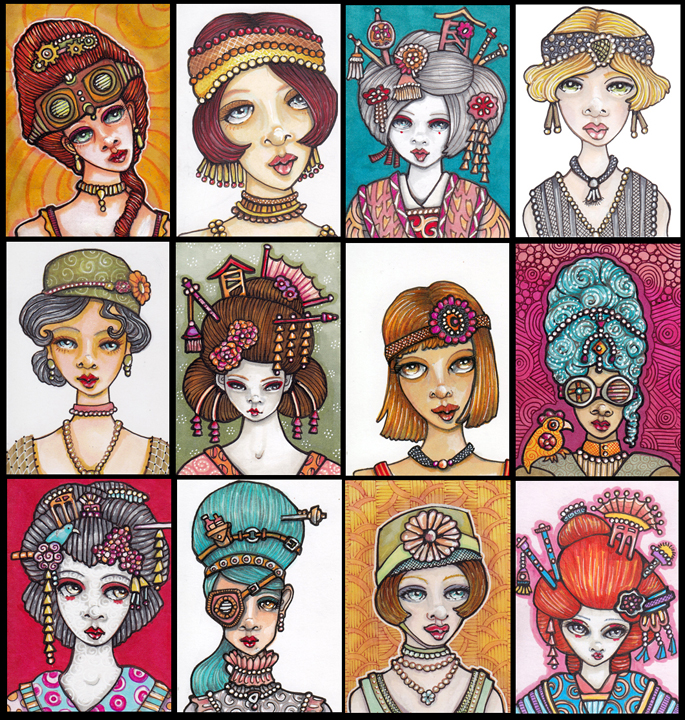 Thanks for dropping in! I have an idea for a book that uses lots of my art cards from the last few years. For one thing, I like them, and for another, it puts this project firmly into progressing territory as opposed to haven’t-started territory. I know which territory I prefer!

More on the book soon, maybe! Thanks for dropping in! 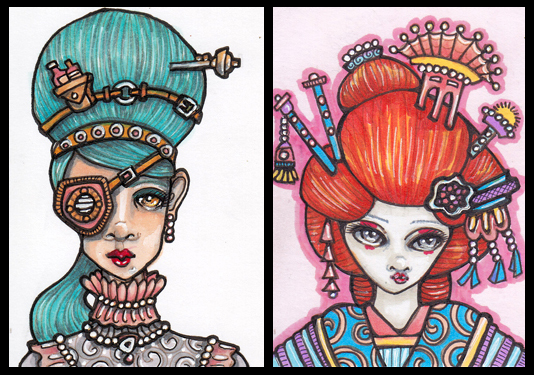 These are seventeen and eighteen of the 29 Faces challenge. Over the weekend I managed six more, and that’s not too bad. 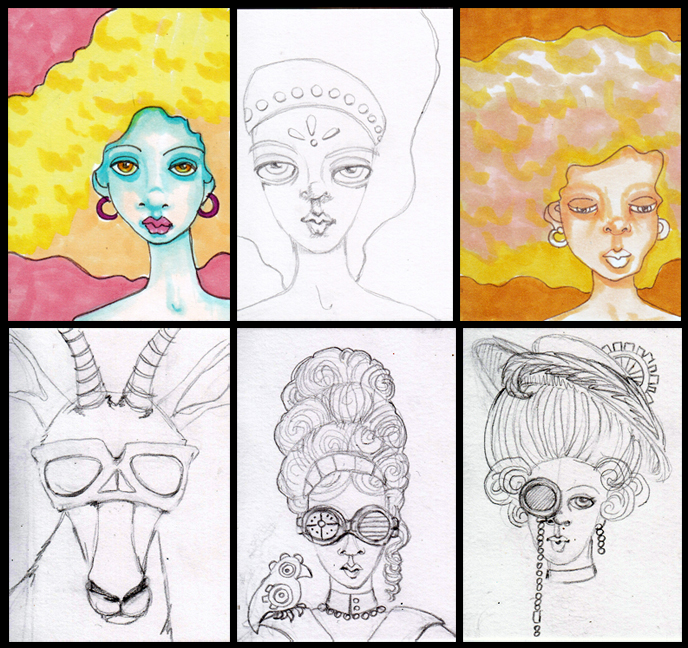 Being sick is not pleasant, and this nasty cold has dragged on too long. I’d say most of us here on the winter side hope Spring shows up soon! Thanks for stopping in. :) 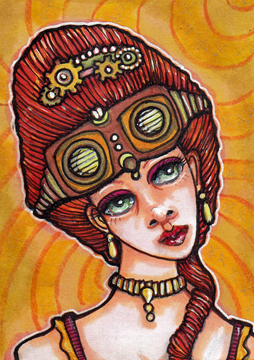 Notes from the Sick Room, Day 6:  The bugs think they are winning, but they are not. I will outlive you, tiny hellions! The worst is I feel better in the afternoons, but then the evening and morning are sucky again. Arrgh! Perhaps one benefit to getting sick is to have empathy for others when they get sick. Which I will. Because this is SUPER SUCKY. But I do like my beehive steampunk lass (progess pics below)! 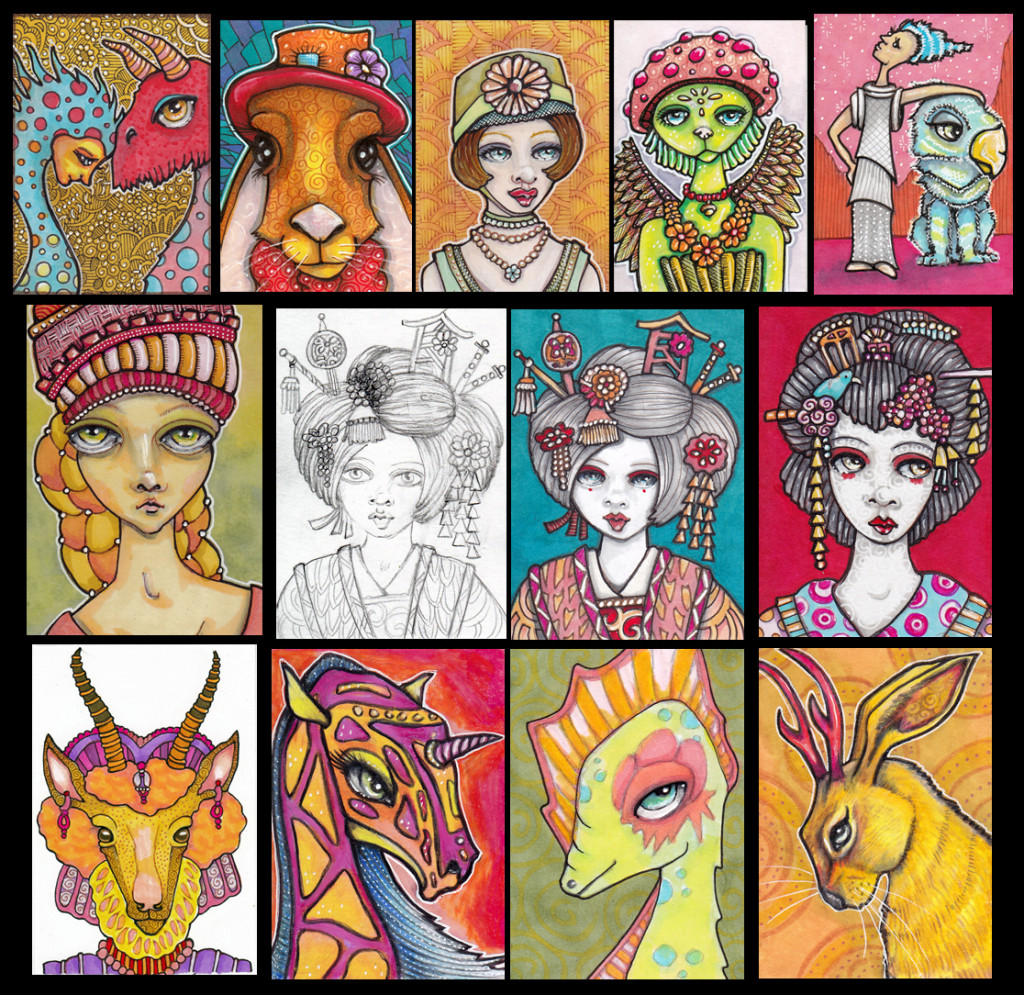 And these are the first fifteen of 29 Faces. So, it is day 22 and I am at #16. Still doable, people! Thanks for dropping in! Apologies if I have not visited back, I am trying but the teeny bugs continue to sap my energy. Bah. 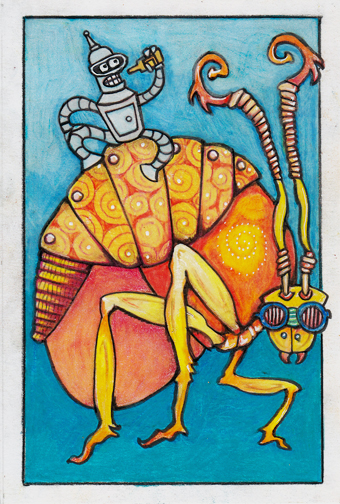 Bender from Futurama (in a rare spot of fan art!) for a Secret Santa partner whose likes include bugs and robuts. I hope she likes it! This is mostly done in Faber-Castell Polychromos. The main drawback to using them (or other creamy-type pencils) is that I use a lot of pressure at times which causes muscle fatigue. And I am no spring chicken! Or other chicken. What a weird phrase. :D

Also! Ugh! Colored pencil dust. (Probably because I use too much pressure.) Any tips? I keep getting little colored dust stuck all over. So frustrating! Please provide tips if you have any.

And this is Linus. Also done in Polychromos and pen. I like him! He is strangely stylish.

Thanks for dropping in! I was in Florida for a long weekend and work continues to be crazy but I hope to get back to at least once a week, soon.

I like this one because there’s more of a story with the accessories and additional figure. But this horse is more cartoonish than I would like. Don’t know if I’ll color it.

I did this one last weekend and I may be done with it. I do love the tiny ship! But the rest is all too close to the edge of the paper (again) and I sort of moved on to other things. But you never know what might show back up here!

Is anyone doing Inktober? Another month-long challenge! To draw in ink every day. Thanks for visiting!

Blue jeans. Victorian ruff. Kilt. Tuxedo pants. Did you wonder if they were stylish? They are so stylish!

It’s Version 1 of a new Facebook banner for the band The Smoking Fish.  I may try to increase the size of the text but with my unpracticed Photoshop Elements skills, the digital part of this took ages and I figure I’d give it a rest for the moment. (The slideshow below has more close-ups of the drawings.)

You may have been following the smoking fish illustrations on my Facebook page. (Or, you could!) I do put a bit more art up there. I’m also still updating Flickr. My Tumblr and DeviantArt pages are ancient history. I think with blog-Facebook-Flickr, three is my maximum. I don’t have time for more, holy cow!

Thanks for dropping in! Boatload of progress pics below (though none of the digital part – maybe next time.)