I was going to say “Cat Hat” instead of “Animal Hat”, but I suspect it looks more like a bear hat, or possibly a brown wolf hat?  I shall call it a cat-bear-wolf hat.

Submitted for the topic “Disguise” at Illustration Friday. And it is Day 26 of the 30 Day Painting Challenge!

You will see in the progression photos (still quite amateur quality photography), I changed colors quite a few times. Maybe I should have stuck to blues and the first, lighter blue background. I’m also not totally sold on that bulky blue-green tunic. But I must stop here and move on! 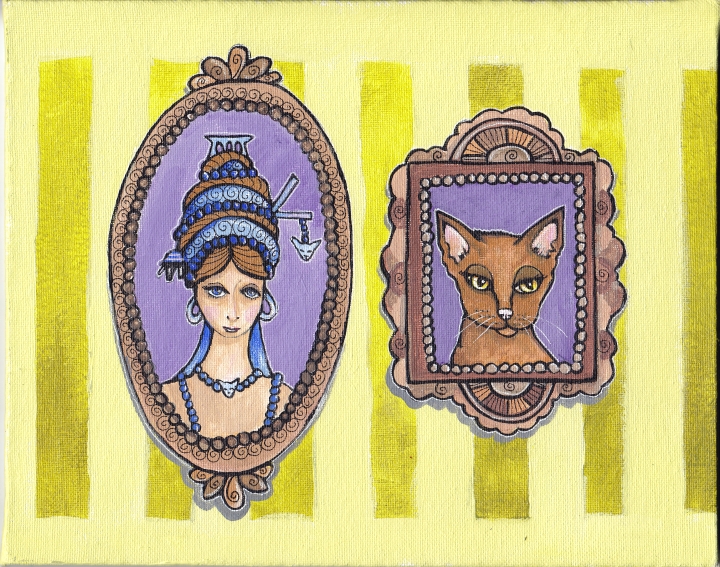 It is, in fact, day eight of the Thirty Paintings in 30 Days Challenge. I skipped day seven in hopes of catching up on the weekend. Work has been more tiring than usual, probably because of the recent holidays. Bah! 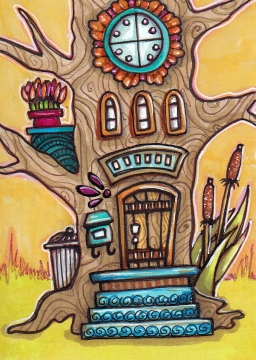 This stylish abode belongs to a gnomish clock maker. He is inside right now, cleaning the hands that belong to that clock window on the top floor. This is Tiny House #34.

It is for this reason that I am also submitting this illustration for the topic “Time” at Illustration Friday, from which I have been absent for ages! Topics are posted each Friday, and anyone who illustrates the topic in some way is invited to submit their link. 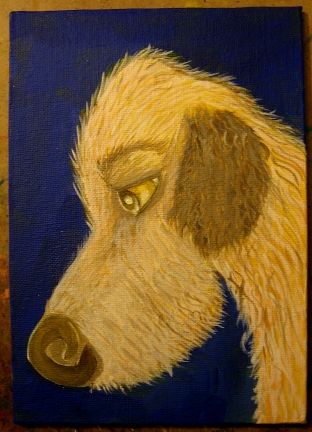 Above, we continue the gripping adventure of the unfinished hound. As you can see, I really need to reference a photo for the direction of that hair on his face. Stay tuned! Thanks for stopping in! 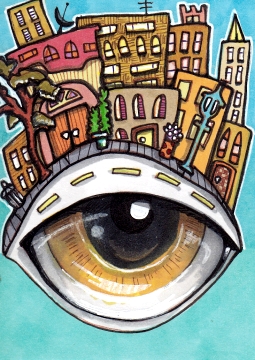 I like this one because I remembered to add the little streetlamp, and potted plants, and a tree, and of course the garbage can. Which may not be a garbage can at all. Perhaps it’s a portal connecting all the garbage cans in all the micro cities.

With that in mind, I shall submit this post for the Illustration Friday topic “Hidden”, for the hidden garbage can portals. Which I didn’t even know about until I wrote this post! 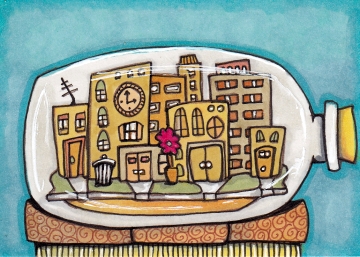 See, there’s another one! These are cities number 19 and 20, of my 100 Cityscapes Project. One or both may end up in my shop. 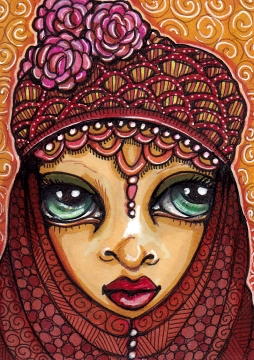 Probably my favorite maiden so far, and submitted for the topic “Lush” at Illustration Friday. (Lush color and detail!) Made for a trade, I was a little sad to let her go.

Over the long weekend I was in Muskegon, MI and brought some ATC supplies. I was surprised to find my (sort of) brother-in-law with a brand new and rather keen interest in Day of the Dead art and folk figurines. So I did a bunch of sugar skull type cards. No scanner though, so no progress pics of these! 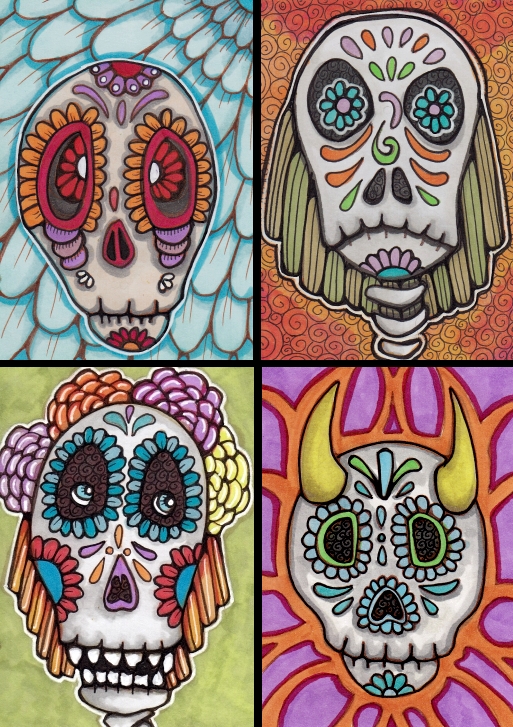 The top right is Sad Leona, and the bottom left is Bony Madeleine. The one with the horns may need a little more work. They are fun to do! Thanks for stopping by! 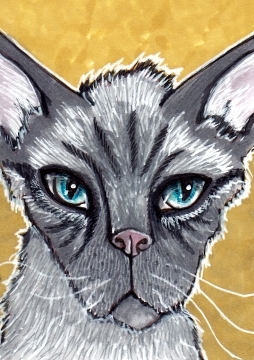 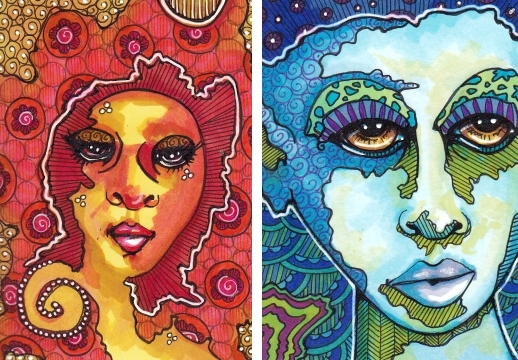 Recently someone pointed out this neat exercise with intuitive faces. Although the directions are for watercolor, I figured I could try to coax a more watercolorish effect with Copic markers. So far the results have something of a hippy vibe.

For this reason I am declaring this the Power of the 1970s post, for the topic “power” at Illustration Friday. I have not abandoned the cityscapes, more of which you will undoubtedly see if you come around next time. And thank you so much to Vinyl Eraser who does terrific architectural drawings, for mentioning my 100 Cityscapes Project! 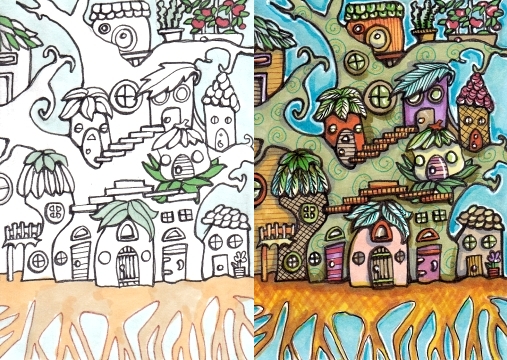 Submitted for the topic “Jungle” at Illustration Friday. My latest unconventional cityscape, it was very fun to make. And I would like to live there. :)

I was also quite pleased with this cat, though she has only the most distant connection to the jungle, having moved to the Great Red Plains in her youth. 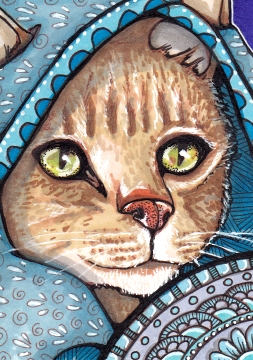 Shown here with her ceremonial robe and shield, Tarabell was one of the three founding members of the Lunar Cat Council. A cat called Elsbeth wears Tarabell’s robe now, with great care and reverence.

The Lunar Ceremony is open to visitors twice per year, and it is a grand and wondrous honor to see the entire Council in their ancient finery.

(Somewhat more realistic than previous cats!) Made for a trade at illustratedatcs.com.

Thanks for visiting! I forgot to send out my last post, so maybe take a look if a robot called Croissant sounds interesting to you. 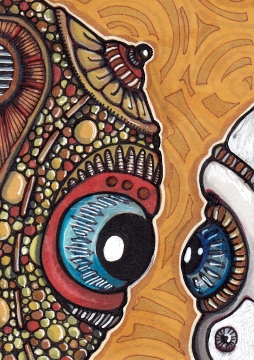 Croissant is the sort of name one acquires when one’s owner allows his six-year old to name his robot butler. Croissant bore it stoically, after the fashion of his kind. But perhaps it made him slightly more suspicious of visitors to the family estate. Other robots, in particular, were forced to endure quite stringent scrutiny.

For the topic “Robot” at Illustration Friday. It’s a bit abstract! And I’m not sure how the big fellow ended up with a lizardy texture. Experimenting, I suppose!

I also figured out a way to get that white on toned paper look, which is to use white gel pen in a sketchy style over lightly colored areas. In this case, lightly colored with warm gray 02 or 03. I also tried to cover up the design in the large eye with gel pen. To mixed results. 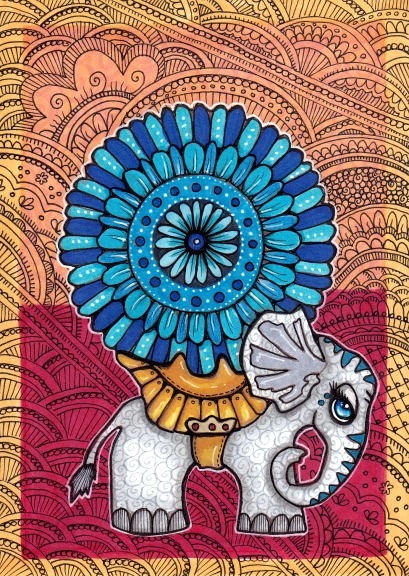 This Peace Flower is a peaceful protest design which offers a large flower in place of the warrior who would normally be riding this elephant, perhaps across an Indian countryside. The background was inspired by mehndi design (henna design), most traditionally used to decorate the hands and feet of Hindu brides, or for other festive occasions.

Submitted for the topic “Protest” at Illustration Friday. [Actually made for a friend who may or may not see this post before the item arrives at her house. But it was too good for the topic to pass up! Ok, really I kind of shoe-horned it into the topic. But still!] I’m not sure if the entire background should have been red. Didn’t want to risk it.

Thank you for your visit!