Good morning/afternoon/evening/dead of night, chums!  Thank you kindly for stopping in for another installment of farmyard steampunk animals.  Well, not exactly farmyard, I suppose, in this case.  But that is simpler than “another installment of steampunk herbivores with big, comical noses” which seems to be the more specific genre I am currently mining.  Or inventing!  No, probably not inventing.  :o) 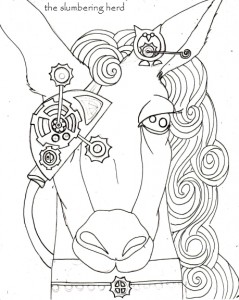 The gadgets are fun to do, as are the Victorian-inspired details (the hair and choker). No hat this time, though I am rather fond of the owl-shaped device on the ear. I tried to get her to tell me the purpose of that particular gadget but she was evasive.  Very secretive, these inventor types. 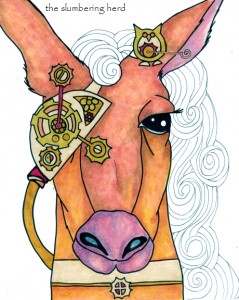 Copic markers , hooray! I have a feeling I abuse them somewhat more than they are meant to be abused.  I have watched a couple youtube how-to videos where talented, soft-spoken young folk delicately paint and dab with their Copics. My own technique could not be characterized as delicate, I must say, with the possible exception of detail work with a 0.05 nib. But of course that is the pen and not the marker.  :o)

After a lot more ink, mostly outlining with a 0.8 and an 0.3 for the smaller bits, I decided I was finished: 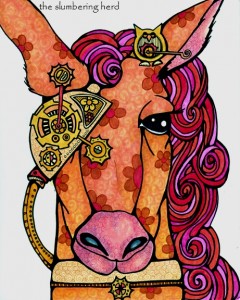 If you imagine her without the hair, she kinda looks like a kangaroo. Or a donkey. Or llama. I googled kangaroos, unsatisfied.  And decided the nose needed to be dark, as she is modeled on a red kangaroo. Which means going over another color and not being sure exactly what would happen. As I type this now it occurs to me I could have experimented on a separate sheet. Bah, caution. Here is what happened:

Had to do the ear also.  Kind of hard to tell in these scans but the nose is dark grey but kept a pinkish tinge. I’m not sure that it makes it look more like a kangaroo, really. But I like it. So what do you think – should I have stuck to the pink nose?

In case you wondered, her name is Daphne and yes, she invented all her own gadgets. I think she had to outsource those flower-shaped gears, though. (Nice touch, right?) Thank you for visiting!