When I started painting these Seussian beasts, ages ago (oh geez, 1987?), they were always accompanied by dogs.  I’m not sure why I left off the dogs for a while, but they are back.  Because dogs are the coolest.  And I wouldn’t really be interested in a land with purple skies and crazy, long-necked beasts without dogs.  I do know one dog-averse person (I don’t really understand it), so at least one person wouldn’t be interested in the dogs.  And I’m sure cat people might like some cats to appear.  I think perhaps there will be some cats.  But these things take time.

I like the bright skies partially covered in bright clouds.  This is not a difficult digital-coloring trick.  You have to start somewhere, however. 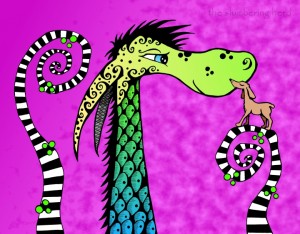 Sneeble and the Strange Dog

Sneeble tried to start a conversation with the strange dog. He said he was friends with Cyrus, a dog who liked to roll in the dirt beside the river. Did he know Cyrus?  The strange dog said, no, he did not know Cyrus, why would he know Cyrus? And anyway, did Sneeble happen to have any snacks?

Sneeble said he figured dogs knew other dogs.  He offered berries from the stripey grasses, but the strange dog turned up his nose.  Sneeble looked past the strange dog into the distance, in the hopes that a better conversationalist would appear. 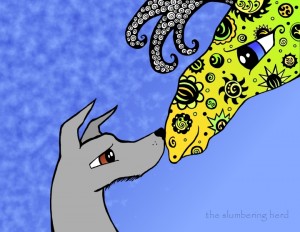 Cyrus and the Painted Beast

Cyrus was not paying attention and almost walked right into the painted beast.  Pardon me, he said.  I am Cyrus.  The painted beast replied with two snorts, a sort of whinny and a shake of her hair.  This was a language Cyrus had never really mastered.  He was pretty sure the painted beast was not going to eat him.  Or spit on him.  Or something else distasteful.

He waited a few moments to see if anything else would happen.