More thrilling digital color combinations (undoubtedly less thrilling for some of you).  This week featuring a (mostly) monochromatic extravaganza (in green).  Lots of parentheses as well.

Three on a Branch

Elsie (the dog) and Maude (on the right) waited for Blossom to wake up.  They stared in a longing manner in the hope that the combined power of their penetrating gazes would rouse her from her overlong nap.  Maude rested her beak on the top of Elsie’s head which wasn’t particularly helpful but Maude enjoyed it and Elsie tolerated it.

Poking Blossom was out of the question.  The one time they poked Blossom awake she refused to pick up the story where she had left off.  It was a good story too, something about an anteater and a tin of sardines.  (It was Elsie who poked her, if you must know.  Elsie is not as patient as a bird, but she is working on it.)  No, they would have to wait until Blossom woke up in her own good time.

Three on a Branch, Night

Sometimes she slept straight through the day.  Although it looks like Elsie and Maude have been waiting FOREVER, in fact they have just returned to their previous positions after a long and satisfying romp in the forest.   Maude has figured out, mostly, which days Blossom’s nap will be particularly long. 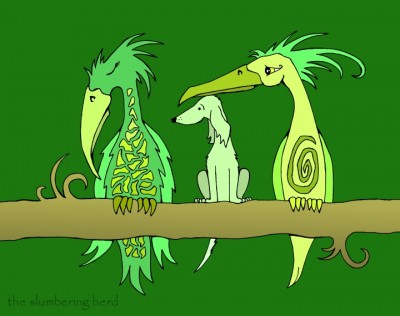 Three on a Branch, In Greens