Here is the most recent:

Who's House is This?

I like it.  I purposely left the background blank because I may make prints with a variety of digital backgrounds.  Maybe I’ll have it printed onto cling film of some kind so you can put it in your window (house or car, whatever).  Tragically, there is a spot on it in the upper left.  I can remove the spot digitally, but I am hoping to put the original up for sale so part of the reason I posted this is so that I can ask my Doodle team at Etsy for some expert spot-removal advice.

Speaking of the Doodle team, the first of the crazy tree house scenes, attached below, is the result of yet another Doodle challenge, this one based on the theme “The Enchanted Forest”. 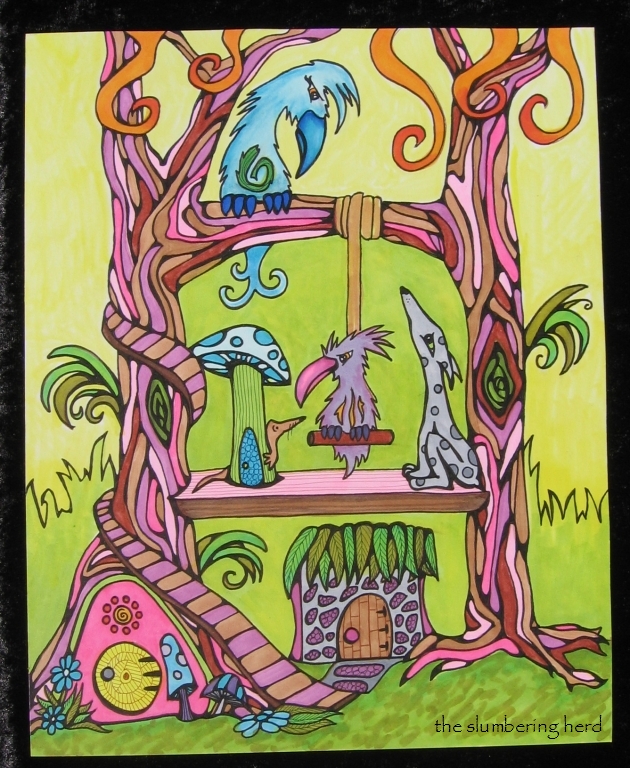 Tocktock the rat was hoping to have a go on the swing, but that silly purple bird was hogging it again. His closest friend was the dog, Ollie. But Ollie mostly liked to stare at brightly-colored things. Everyone said he was a magical dog because he could see colors. Tocktock did not think this was useful magic. Useful magic would get him a turn on the swing quicker.

Tocktock was even pretty sure the big blue bird was frequently irritated by the swing-hogger. But he could hardly expect one bird to side with a mammal over another *bird*. Oh well.  Maybe he would go eat some bugs and come back later.

This 8×10 woodland-type community portrait is available in my Etsy store.  Yay!

Here’s a couple other recent things in my continued attempts to figure out these tricky Copic markers:

Cecil was quietly waiting for the tiny dwelling’s occupant to make an appearance when the monstrous pink bird showed up. Hello, he said. The bird looked at him with interest but did not answer. Do you speak? asked Cecil. The bird shook its wings out. Cecil did not know if this meant no. Or yes. Or wasn’t an answer at all but just a shake.

I have been visiting this spot for several days, said Cecil. I don’t know who lives in that house, but I am hoping they will show up. Maybe they will be nice and make tea. The bird bobbed his head up and down. Cecil did not know what to make of this, but was happy the bird did not seem to want to eat him.  (A 5″ x7″ drawing.) 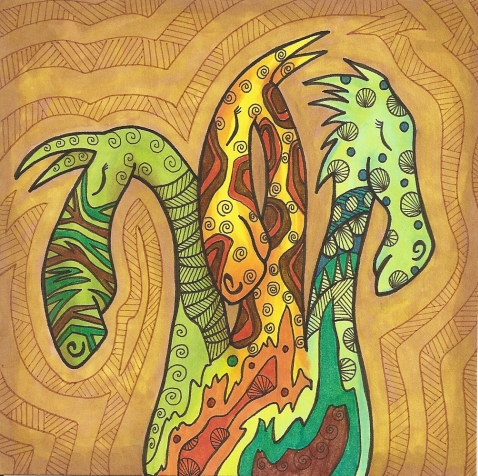 One of the heads is always supposed to be awake. At least, that’s what their mother told them. You’ll get caught unawares by a monster! she would say.

To be perfectly honest, the three never believed this tale. Sure, it might be useful for one head to stay awake in case of rain, but they were a hydra! What monster would possibly want to tangle with a hydra? Besides, naps are such nice affairs. They take at least three per day. (A 5″ x 5″ drawing.)

Lymon the bird noticed recently that his favorite tree was becoming a favorite spot for other people. He liked to think of animals and bugs as people. Why not? They could all talk and everything, although of course they preferred not to let the humans know this.

He still wasn’t sure what the little grey guy was, since he was pretty sure porcupines don’t climb trees. Echidna? Hard to say and frankly, hard to understand with that high-pitched voice. But he was a patient bird-person and eventually they would understand each other.

I quite like this ACEO.  I even listed it at one entire DOLLAR more than the others, although I am considering adding another entire dollar for a whopping total of ten dollars.  What can I say?  Sometimes I go off the rails.   :O)

4 thoughts on “Who Lives in this Tree House?”