The Copic adventure continues.  You may remember during the last installment that our herd-tending heroine had recently fallen for photographs of various domestic beasts, up close.  Particularly the noses. And perhaps you even recall that the big nose photos led to a preliminary expedition into big nose art territory, Slumbering Herd style.  There was a cow husband and wife, and then a water buffalo-highland cow hybrid type beast.  And then these things happened:

Goats.  A sheep. Cow and Goat.  Sheep and Cow. And that was only the beginning.

(All available in my Etsy shop [unless otherwise noted!]:  My Shop )

It’s true that goats will eat your socks if you let them. Also your long johns, your shoelaces and your dish towels. But we should still be nice to them. This is Lou. He is a lovely, friendly goat beast, although he can be grumpy if he doesn’t get enough sleep. Sometimes you can find Lou playing backgammon with his best friend, Genevieve. They are quite evenly matched, so you never know who might win.

Sometimes it’s nice to be reminded of things we already know. This is Genevieve. She is a lovely, friendly goat beast. But she will most definitely eat your socks should you leave them in tantalizing reach. However, if you remember to put your socks away, you might find Genevieve playing checkers with Lou, her best friend. Sometimes she lets him win. 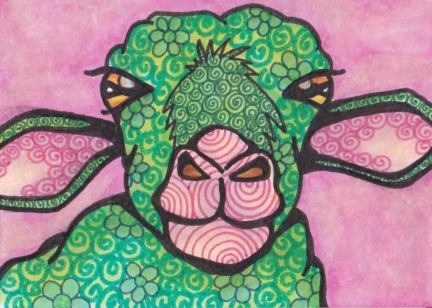 Mindy the sheep is a big fan of Project Runway (the TV show). So far she has written two letters to the producers offering some particularly fine and beautiful bright green wool, either as material for a challenge or as a prize of some kind, but she has not received an answer. Once she dreamed that Keidi Klum invited her to be a guest judge. She made several hilarious and witty remarks during the judging but sadly when she woke up she couldn’t remember any of them. 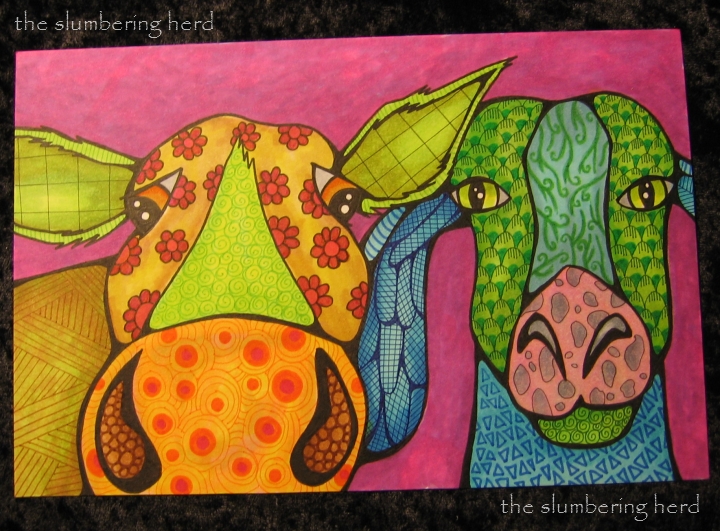 This is Marlene and Rockford. Marlene, the mostly cow looking creature, has been having a hard time lately. She stayed up too many nights reading “true” ghost stories and as a result, keeps getting spooked by noises, shadows, and clowns. Well actually I think she was always spooked by clowns.

Rockford, the mostly goat looking fellow on the right, is a therapist specializing in ghost phobias (Phasmaphobia, if you like scientific names for things). As you can see, he is quite calm. Mesmerizing almost. Which reminds me. Someone stole my Violet Crumble candy bar the other day and I have a feeling Rockford may have pulled a fast one on me!

It may be obvious if you note her bleary-eyed stare, but Hemmy the sheep beast has not had coffee yet this morning. She probably won’t even speak until she’s finished at least half a cup.

Hattie the Highland-cow-type beast is slightly irritated but holding her tongue because she and Hemmy have been friends for more than ten years. Stumbling out of her bedroom moments ago, Hemmy trod squarely on Hattie’s ankle. Ouch! But Hattie would get over it. (Also, the last time Hattie forgot to clean her hair out of the shower, Hemmy didn’t even mention it.) It’s so nice to have a good friend like that, even if it means getting your ankle accidentally stepped on from time to time.

Meet Mara. She is a a shape-changing pony from the magical Assateague Island (if you are female you probably remember “Misty of Chincoteague” a lovely book by Marguerite Henry) Shape changing ponies can be seen by other ponies but not humans, so of course she is never bothered by the herd roundups.

Mara’s specialties on the island are flower tending and pony dispute arbitration, but she is always willing to give rides to friendly sprites and water pixies, or run messages in times of dangerous weather. Mara is the second oldest of the pink shape-changers, and loved by everyone but a few grumpy gnomes (who don’t like anyone). She can change into a sprite or pixie, but only under a full moon.

Andrew is a shaggy blue Shetland Pony with a light stripe on his nose. He likes to browse estate sale listings for medieval inspired tapestries and other boldly-colored fabric wall hangings. He is trying to cover all of his apartment walls with them. Most of the time they are too expensive, but sometimes he gets lucky! Sometimes he benefits from being a blue pony interested in tapestries, as people think it is terribly unique and are occasionally inclined to give him steep discounts.

This is Dale, a rare blue llama with purple spots. He has a twin sister named Helen with the same coloring, and they were very popular in the yard as youngsters. Helen has since moved to New Zealand to live with an orange Llama named Jesse. Dale misses his twin but they Skype on Saturdays.

This is Rona. She is mostly green now but will turn blue to match her nose as she gets older. Recently Rona won a spelling bee between all the young dogs in the village. Her final word was “squirrel”. The second place winner stumbled on “papaya”.

As part of the winner’s package, Rona gets to chase cats all afternoon. This is actually a paid gig for the cats, who are in no danger because Rona is a puppy. And not particularly dexterous yet. 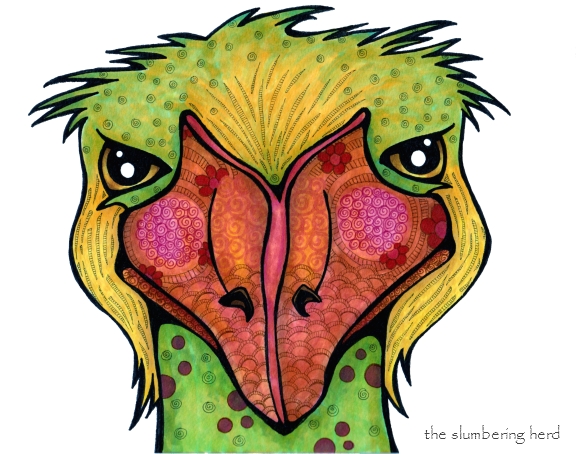 Cecilia is usually much cheerier than she looks at the moment. She asked her friend Domo the Owl to bring over a cupcake, because she knew he had been baking. Well, he brought three cupcakes because he wasn’t sure if she would like the pumpkin, or the chocolate cheesecake, or the coconut vanilla best. (Actually, Domo was hoping she would try them all and give her honest opinion. She was super at honest cupcake opinions and he was trying to make a good impression on a new client.)

Well, she ate all three cupcakes and now she is not feeling very well. Also, she totally figured out that Domo did it on purpose. On the other hand, they were so very delicious and she couldn’t yell at him because then he might not bring any over next time. (Incidentally, the coconut vanilla was best.)

Lulu (on the left) is playing the statue game, refusing to move a muscle no matter what anyone says. Kind of like those guards at Buckingham Palace. Gin-Gin, the orange capybara-kind of beast on the right, has exhausted his best jokes, and is trying to remember what insects Lulu doesn’t like so he can try to make her believe one is crawling on her. But his memory isn’t very good. Also, he is hungry and he knows that two tomato sandwiches with his name on them are sitting on her kitchen table.

He will probably resort to tickling, even though it is against the rules. It wouldn’t be the first time.

So there you have it.  Many exotic farmyard beasts.  Lulu the Emu and Mara the Pink Pony are undoubtedly my favorites.  And the llama. Also, some old friends have recently revisited my little shop and noted a difference for the better. I think it’s the big noses.  And from this I think it is safe to say you should follow your (minor, inexpensive) obsessions. Big nose animal photography, as an example. You never know what might happen.   :O)

1 thought on “Barnyard from Another Planet”