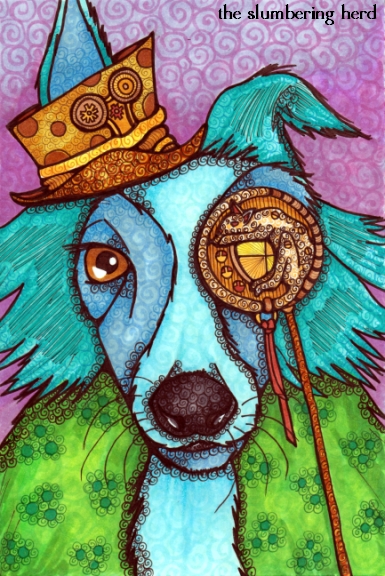 Ugh, midnight and I must work early tomorrow and then board a plane for Florida. (Much cheaper tickets the week after a holiday.) But I’ve been meaning to finish this beast for days. Usually I start and finish one of these 8x10s or 9x6s in one night, or occasionally, two. So this one sitting for five or six days was an anomaly. And dammit I’m staying up to finish this post.

I fear he’s been a bit overworked. By the pen, not by his boss or something. I don’t know if he has a boss. Frankly, he’s been rather mysterious about his past. The only thing he will say for certain is that he is certainly NOT a collie. As you can see, these protestations have not led to my changing the title of this illustration or this post. And sure, he’s not a classic Lassie collie.

He’s also slightly standoffish, so I’m not actually sure if he’s wearing a fuzzy green coat, or that’s his actual dog coat. Although… it’s probably not fair to call him standoffish.  Deep in thought is much more likely. Inventor-types so often are.

I finally broke out a white gel pen I had picked up, but I really don’t know anything about how to best use it. I did some swirls on the cat part of the eyepiece (then went back over them in black because I didn’t love the look of it), and put a few swipes on his nostrils. (The eye is not gel pen, it was just not colored.) Anyway, progress pics! 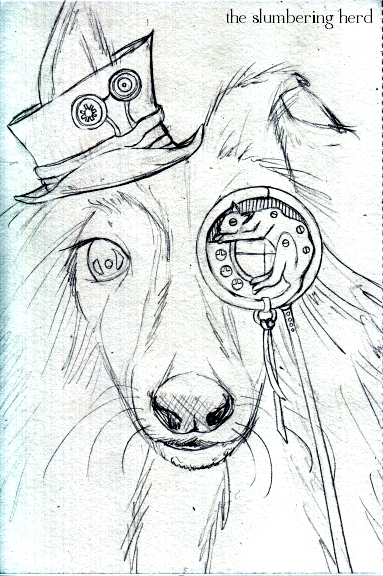 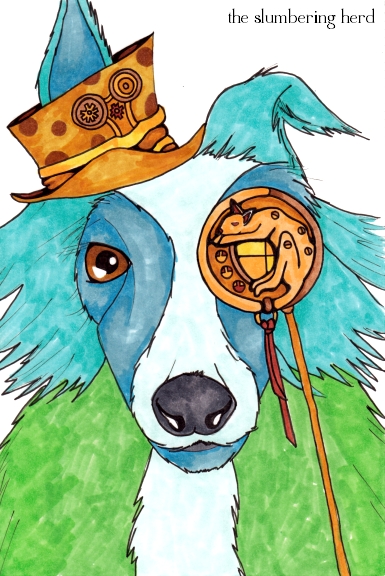 Some combination of the second to last version and the final version would have been preferable, I think. I like some of the effects that were added, but it is too busy and I should have stopped sooner.

Overall I like him and despite the enormous number of outstanding dog/animal artists on Etsy, I must do more dog beasts. They are, if not the best kind of beast, then at least in the top 5% of beasts. Amirite? Thank you so much for dropping in!