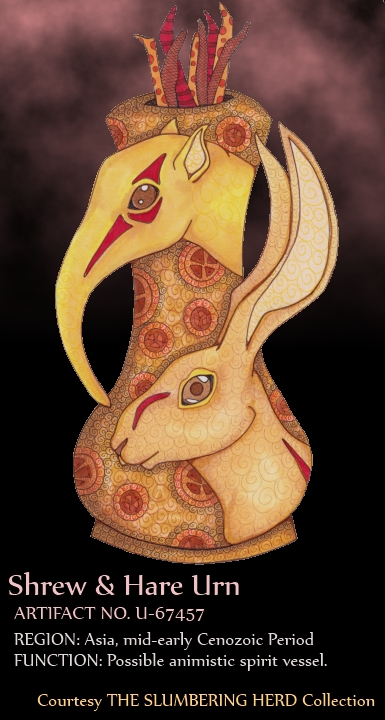 Copic Markers and Multiliners, on Canson 150 lb. Fanboy Paper, with digital background and text added at the end.

The topic is Ancient Artifact at Monday Artday. To me that meant: 1. something decorative, and 2. with animals. I wanted to actually limit the color palette (rather than intend to and not do it), and also see if I could avoid my usual thick black outlines. And now, a super neat progress slideshow (my second!):

Row one:  1. Boring urn with fancy handles; 2. a hare (they are cool!), and then something with a long nose for a handle (sort of) – elephant shrew?; 3. better elephant shrew is also GIANT elephant shrew. 4. replace lid with something simple (ugh lots of eraser marks – I really should try to keep a lighter touch). 5. Another different top. Needed stuff coming out. Boyfriend came by to ask why I put a bunch of tiny legs in there! I guess I was thinking sticks. 6. Inked in red ink because I decided to go with  browns and reds.

Row two: 7. Masquepen stage on body of urn; 8. Ooh, golden browns, how I love them. Am I a pro at shading? Not by a long shot, but doing ok. 9. Brown pen outline. I thought about stopping right here. Really! 10. I was worried about adding the red because I was liking just the browns, but I like the way the red contributed. Also went back over the outlines with a very tiny black multiliner – 0.03. 11. Needed some more design on the main part of the urn. 12. Swirly bits – hooray! Adds a bit of depth.

Row three: 13. This is what the actual page looks like, all Copics (and a couple Micron pens). I did a very pale swirl on the rabbit and tried yellow on the shrew but you can barely see it (which is fine). 14. Digital background in vibrant blue, the color I was going to do with Copics (but at the last moment I decided against using all the marker it would have needed); 15. Slightly mysterious (?) black with pinkish clouds. I wanted to do something dark and “serious” and add a kind of museum tag to the bottom. 16. The end!

Thanks to everyone for the insanely nice comments lately. So thrilled people like to look at these things. ;)