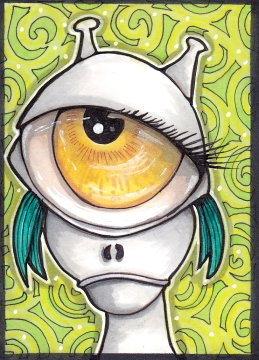 A persistent rumor in scientific circles is that a small creature with one large eye appeared on the Saturn space station one day. If it had a small craft of its own, they never found it. It didn’t speak, but displayed an uncanny affection for Melba Toast, an old earth delicacy which the lead climate engineer had been hoarding. They named the creature Melba T and studied it for three days. When the Melba Toast ran out, the creature disappeared as mysteriously as it had arrived, with no witness.

Melba T was created for a “People of Planet X” swap, as mentioned in the last post. I think the curve of the white highlights is one of the keys to an effective eye. I use a Signo Uniball white gel pen. The tip clogs frequently but it is the best opaque white I’ve found for this purpose (some might prefer white paint with a brush).

And one more thing. I am going to try to add a new art resource to all of my blog posts, something I’ve actually used and found helpful. After I’ve done a few I’ll create a page and put them all in one place.

While reading up on noses recently I came across a very charming and effective online art instructor called Stan Prokopenko and his channel, ProkoTV. These two videos helped me with noses more than any other video or written instruction:

Proko: How to Draw a Nose: Anatomy and Structure

ProkoTV: How to Draw a Nose: Step by Step

(Let me know if you watch them!)

Thanks so much for visiting! A few Melba T progress pics below.

15 thoughts on “An Alien ATC and Some Keen Resources!”