This one is probably my favorite so far. And is number six in my new 100 Cityscapes Project. I was thinking of doing a set of mushroom cities, and maybe some moving cities (see below)! Submitted for the Illustration Friday topic, “Hybrid”. 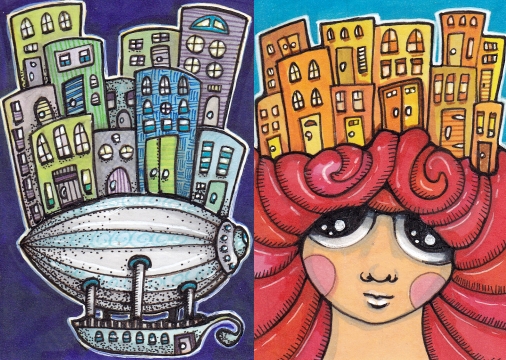 Marla was the daughter of a lesser deity, a bratty, difficult child who flaunted her small magics by teasing local children and animals. One day she convinced a djinn to grant her wish for a small city of her own, but in the manner of djinn her wish was subverted. Her father refused to intervene even when the tiny city seemed to weigh heavily upon her. Finally, to the surprise of many, she became a kind and thoughtful steward for the city and its tiny inhabitants.

19 thoughts on “Hybrid Cityscapes, Pen and Ink for Illustration Friday”