I took a day or so off! But now I am back and with only a few more days of the 29 Faces to go.

Ella the forest pixie with her little bird Warrick, was Face #4 in just an ink outline. Beside her is Dame Edwina, her aunt, who is Face #28. They are members of the Springdale Thistlewaite clan of pixies. These pixies are also Maidens number 169 and 170. (Since 2011, as previously mentioned.)

Dame Edwina is the first work I’ve done in ages without stopping for progress scan. People ask how I remember to do progress scans, and though I forgot a lot at first, I just kept at it and now it’s part of the process. But today I purposely chose not to stop for scans. I’m not sure whether it affects the final result, for good or ill. Further tests are needed. 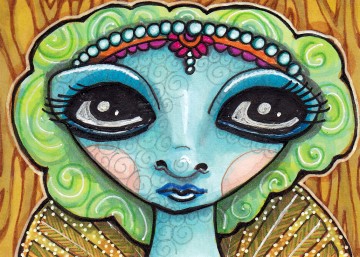 This little tree sprite was just an ink outline when she appeared as Face #12. Ugh, I wish I’d left well enough alone. The eyes were much cuter before I messed with them way too much. I thought about using paint over them but she prefers to be left alone now.

7 thoughts on “Two Forest Pixies and a Sweet Tree Sprite”