Oops, forgot to change the order of creatures in the title. Too late now since the memos have been distributed! 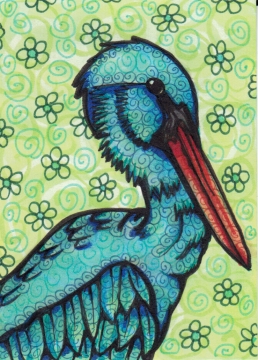 More tiny Artist Trading Cards. I don’t know how long the enthusiasm will last but that’s ten in two weeks.  It is certainly much less daunting staring at a blank 2.5″ x 3.5″ than an 8″ x 10″.  For one thing, much easier to fill in a background, and I like to do backgrounds.

I have a lot fewer smudging problems since I’ve been using colors other than black for the initial ink. Copic has a fairly limited number of colored fine liners so I use Micron and Prismacolor fine liners, too. 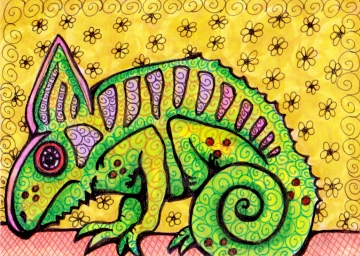 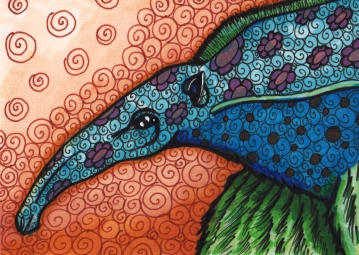 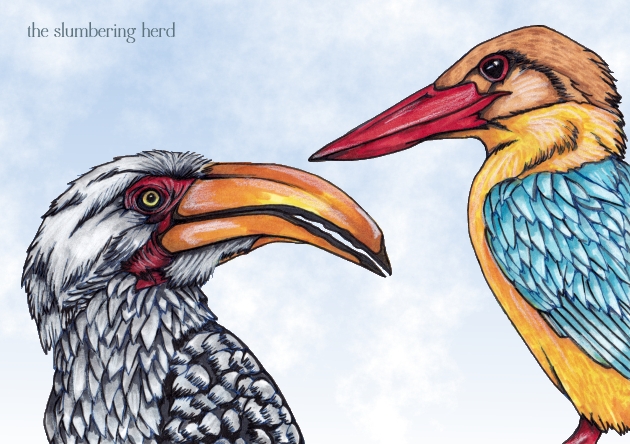 Ari was flying northeasterly over the Indian Ocean, and Shey was flying southwesterly over the Indian Ocean, and they both landed in the Seychelles the same week in 2009. Crazy, right? Both natural comedians, they became instant friends and for a short time they performed a Strange Bird comedy show that was a huge hit with the local Red-footed Boobies.

As you may know I have been exploring all manner of exotic creatures at this blog. Most recently it’s the birds in particular that have caught my fancy, and thus today’s drawing. Started with a lot of refinement in pencil then several scans showing the blue .05 multiliner. After that, Copics and .1 and .2 black multiliners. Finally I attempted some highlights with a white Prismacolor pencil, to mixed results. (Still trying to find a white gel pen that works. Not sure about attempting some white acrylic. Hmm!)

No Masquepen or swirls this week. Crazy! Thank you for stopping by!