Welcome back!  Steampunk Llama, aka Futurellama, aka Charlotte, is complete. Probably.

The first color never looks good and I sometimes question whether the piece is worth finishing at this point.  (Well, maybe less now than I used to.) 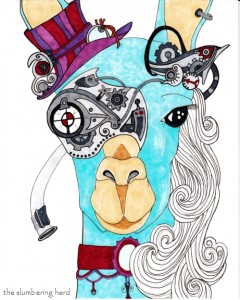 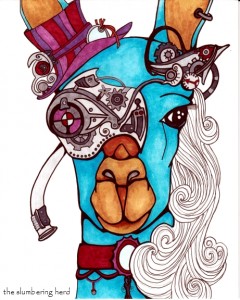 I was mostly able to correct the problems created in the initial inking. The horribly lopsided circles are much better now and the weird baby crib thing in the top right (see previous post) is now a tube and a porpoise-looking bit of machinery. 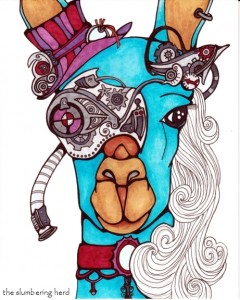 And then I couldn’t decide on the hair color. I was planning on red.  But would it be red and brown or red and purple or red and orange? I almost did red and orange (and brown, probably), but I didn’t really want to go red on blue.  Or blue and orange, really, despite their being complementary and all that. Anyway, I thought I had a nice assortment of blues to do the hair and using the same color as the skin but different hues can have a nice effect. I do really need more practice with hair though, whether this kind or another kind.

Haven’t 100% decided about whether to fill the background, but it might be nice to get prints with different digital backgrounds.  May go back with a 0.05 nib for some finer detail, but may not. Almost avoided the shading swirls I’ve been using, for fear of additional clutter on an already busy field. But I used larger ones closer to the background color and achieved the effect I like with a bit more subtlety. Or so I foolishly think.  ;o)

As a side note, I still browse deviantART regularly and the overwhelming number of really accomplished artists can be a bit disheartening. (Is there room for any more? Will I ever achieve the skill level of these people? Do I need more formal training? That sort of thing. ) Just going to keep slogging on, though. 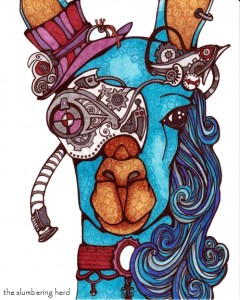 This is Charlotte, a distinguished, long-time independent agent for the Urban Camelid* Protection League, and as such she was not at liberty to reveal the uses for her various apparatuses. I believe the free-hanging tube is both a speech device and and a unit that can be attached remotely to certain mechanical gadgetry. But this is purely speculation on my part.

Charlotte was very friendly and professional, but despite my crafty line of questioning she did not reveal any UCPL secrets. This is why she is one of their most respected field agents, I imagine.

Drop a line and let me know how you ended up here!  :o)