If you’ve been visiting at all, or noticed my little Etsy art catalog to the right, you have some inkling that I have been drawing a lot of recognizable and less recognizable beast portraits in, well, non-traditional colors. Llamas and other large-snouted types are my current favorite, and the other day I decided instead of a simple portrait, I would steampunk* one up.

A hallmark of steampunk style is the pervasive use of small electronic gadgetry (the purpose of which is not often clear). It is generally shiny and intricate with lots of cogs, gears, moving parts and decorative bits. So I had to decide. Try to invent some actual devices, which seemed slightly overkill for this one portrait, or just kinda wing it.  I went with wing it.

I also had to decide whether to employ mechanical drawing means (tracing circles, for example, which I generally avoid), in order for the mechanical bits to be as precise as possible.  I didn’t go that way, as you will see in the sketch (and worse! in the initial inking).  It’s just not my style.  I’d like to think I’m not lazy about details, but I suppose one could argue that point.  I guess my general preference is to err on the side of an organic result rather than an overly precise (mechanical?) one. 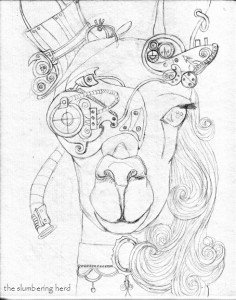 I decided to simplify the drawing for the first ink outline.  This outline, done with a smallish size nib, is mainly a guide for the color, and can change quite a bit by the time I do the final ink.  Sometimes I’ll do some correction with a larger nib, or fill in solid black detail areas (like the eye).

It was originally going to be a male beast, but I happen to be on an Etsy Team which is currently doing a doodle challenge based loosely around the theme “Hair”.  So I did hair.  And it happened to be a really nice Victorian-style detail to go with the hat and choker.  I haven’t done a whole lot of hair, preferring beasty animal types, but hair can be a really cool element in a design so I hope it works out!

As you can see, the result of simplifying in this case is a somewhat borg**-like collection of shapes and tubes, and the strangest baby crib looking thing at the right ear. It was intended to be a kind of enhanced listening device, but now I’m going to have to see what I can do with it.  :o)  Also, several quite imperfect circles are in evidence, which I will try to fix up later.

To sum up, yes, I took two severely trendy topics – llamas and steampunk – and did a mashup.  Is this the most original idea in the history of the world?  No.  But that doesn’t mean it can’t be super cool.  :o)

Updates coming soon.  Thanks for dropping in!

*”Steampunk is a subgenre of speculative fiction, usually set in an anachronistic Victorian or quasi-Victorian alternate history setting. It could be described by the slogan “What the past would look like if the future had happened sooner.” (Thank you, Urban Dictionary.)

**Borg – “An immensely powerful civilization of enhanced humanoids from the Delta Quadrant of the galaxy. The Borg implant themselves with cybernetic devices, giving them great technological and combat capabilities. ” From various Star Trek television franchises. (Thank you again, Urban Dictionary.)