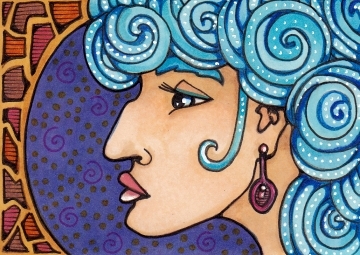 Lena the Seer acts as both Counselor and Matchmaker to all the races of people in the Wonder Woods. She is well-respected by all but a few stubborn goblins who rarely heed her advice. Inevitably to their detriment.

Despite an existing list of trades and swaps I need to do (plus the great topic “Book” for Illustration Friday this week!), sometimes I’ll take a detour and do something else. In this case, the “Pleasantly Pretty and Particularly Peculiar People Profile Swap” at atcsforall.com. As a bonus, this swap inspired five more maidens for my 100 Maidens Project, which is now up to 32 maidens. (I must admit I was too fond of Lena the Seer {above} and decided to keep her rather than send her in for the swap!)

The Fontaine X97 is considered a multi-class weapon. It is equipped with both long range and narrow beam lasers and a variety of explosive and cloaking attachments (available separately). It is rated M-14 and requires a Second Master’s Class license.

The Fontaine X97 is analogous to ancient earth’s BMW 300 series. This series was affordable to a wider audience than its top models, while still retaining the highest in early 21st century innovation and engineering.

For “Robots, Rocketry and Rayguns Swap” at atcsforall.com. If I haven’t mentioned it sixty-seven times already, I highly recommend atcsforall.com for anyone looking for a little inspiration, practice, feedback or ideas. It is open to everyone and features a huge range of art styles and levels.

At the risk of making this post way too long I just wanted to say one more thing. I sometimes get comments asking how I have time to do so much art! Well, I do have a regular job as an office manager, but because business is slower this year I am working about 32 hours. But the main reasons I think are, 1. I have no kids, and 2. I don’t go out much. Also, my current Artist Trading Card phase means tiny art that just doesn’t take as long as larger pieces. Thanks so much to everyone for stopping by! Progress pics below.

13 thoughts on “Maidens in Profile and Retro Sci-Fi ATCs”