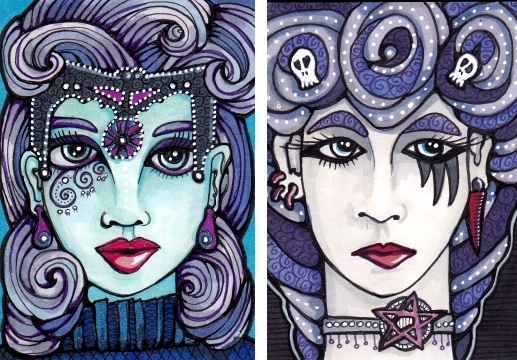 Holy cow, will the ATC madness ever end? (I hope not.) If you’ve been here before you may know I started a project called 100 Maidens on Flickr to catalog my adventures in illustrating maidens (mostly maiden faces, truth be told, but I had been avoiding doing people for years). These are four of those maidens, who now number 49!

Cerys never wanted the crown but when all the other options were exhausted, she wore it justly and little complained. And so she kept Hope alive for another generation.  Made for a “Kings and Queens” swap at illustratedatcs.com.

This is Tess. A few years older, she is a bit like a den mother to the local Goth scene. She is a bartender at the The Shady Maiden and occasionally sells mysterious potions out of a very small room in the back. None of the thieves who occasionally break in hunting for her stash can ever find the entry to the room. Made for a trade at atcsforall.com. 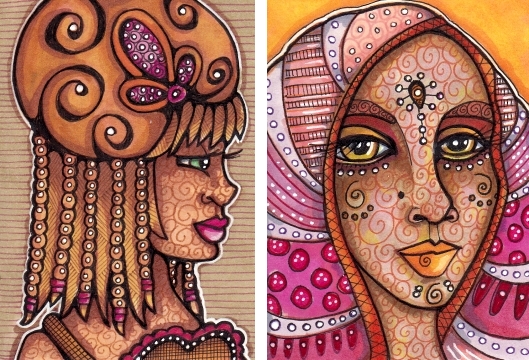 Natasha has always been drawn to strange hats and in her new apartment she has created The Misfit Hat Room. People who visit the room often describe a strange craving for pastries after spending time there. Made for a swap at atcsforall.com

Dahlia has picked up quite a few tricks from assisting her wizard father for so many years. She does not fear walking in the woods alone, and has twice foreseen events that allowed her family and their animals to avoid danger. Made for a trade.

You guys! While I was making this post I was looking through my site stats and saw that several people had come from a particular page, so of course I went to see. And here’s what I found. A big thank you to Dogster!