You guys! I present to you these queens though perhaps they should be dogs, since I am sick like one. Ugh! I had a really bad cold a few weeks back that lasted far too long, and when it finally started to go away, I believe my boss brought in the flu. He claims he doesn’t have the flu. Whatever it is, it is horrible. For all of us who are sick at the end of this horrible too-long winter, I hope for speedy recoveries all around! 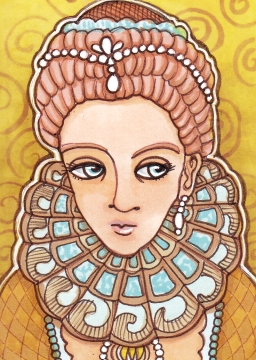 Though she preferred to dress in her brother’s breeches and help train the hounds, Beatrice was often forced to dress for important guests and occasionally – much to her chagrin – suitors.

Reference photos for Beatrice include Christine Marie of France and Portrait of a Lady in a Red Dress. I wanted to show how you can get ideas like costume styles from an image without copying it exactly, and also to show beginners that these things don’t spring fully formed from our heads! 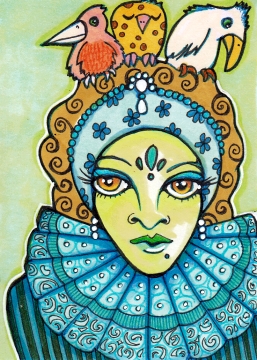 Jory’s tutors were amazed when she taught her little birds Gretel, Gosling and Grim to perch on her bonnet when she was just nine years old and the birds were little chicks. As they got older, she had to build a sturdy armature into all her bonnets to hold their weight. Many little girls in the village have tried the same trick with their own birds, but none seem to have Jory’s magic touch.

Beatrice and Jory are Maidens number 70 and 72, and were made for trades at illustratedatcs.com. Thanks for stopping in!