The Most Popular Sheep Cart, Copic Markers with Digital Sky

This week’s Illustration Friday topic: “Popularity”. I really had no idea what to draw, for a while, and then I decided that two competing little kiosks might be nice, with competing salespeople. And maybe the popularity of one had to do with the pretty girl running it, and for the other, the quality of the product. But sheesh, that’s a lot to get into a single frame. At least for me who hasn’t done a lot of narrative drawings.

I started to draw the kiosks, but that was more complicated than necessary and I switched to little sales carts.

Rather than plain little carts, of course I figured they should in the shape of animals. Goats or sheep, perhaps. As I drew them I decided they would be very different kinds of carts, and one would be more popular than the other.  I picked toys because a little anime style cat could be seriously cute and I was thinking zombies for the other cart but went with misfit monsters. 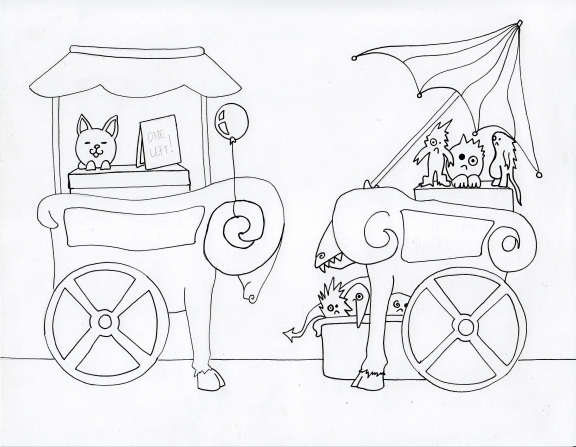 I wanted to add more things, but I was worried about clutter. So, no little sales tags, no “50% Discount Sale” sign for the monster cart and no salespeople. Not even any customers! So I tried to figure out a slogan or saying that would tell the story I was trying to tell. 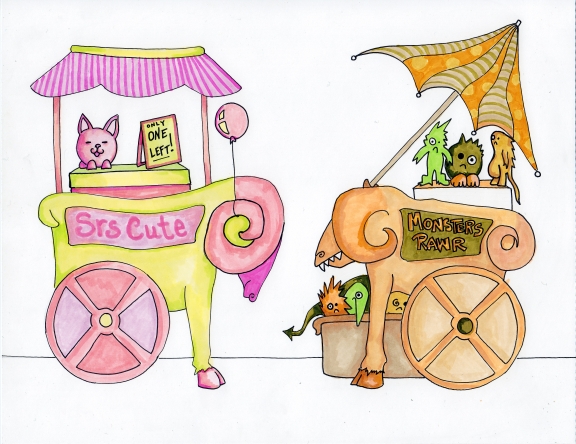 Thank you as always for coming by and thanks to everyone for the kind and excellent comments.

Which reminds me!  A very kind and hilarious person at Moonsword’s Chamber has done a little write-up about my shop. He showcases a lot of different artists and I found some really cool ones there, so take a gander if you have a moment!