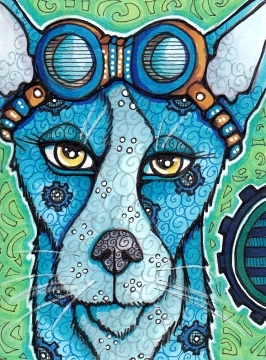 For “Whiskers” at Illustration Friday, a rather late entry!

Jasper has always been a tinkerer. As a youngster he fashioned a rudimentary mechanical ball thrower so Felicia, his younger sister, would give him a few moments peace. It only threw three balls before jamming, but his fifth prototype several years later would regularly work for a full thirty-two minutes. He moved on to snack-delivery devices after that -snacks being the primary canine motivator. He won’t show anyone yet, but I think that device beside him is one end of a conveyor belt.

I’m not actually sure that the whiskers are working here. I used a white prismacolor pencil because the gel pen leaves too thick a line. I think these whiskers are too long, but it is a whiskers experiment for a whiskers topic.

So as I’ve mentioned, I’ve been making lots of art for secret santa swaps. It is fun and I can’t wait until things arrive at their destinations. But it has also harshed my blogging vibe because I can’t post any of it. (But I will later!) Here is one card that didn’t make it into a box:

Celestina is a Day of the Dead Calavera girl, similar to ones I posted a few weeks back. Many of the ATC folks do really elaborate and realistic ones which are super cool. Mine are more cartoonish (and the hair highlights are funky) but they are very fun!

Thanks for stopping in! I hope to get back to regular posting again.